Posted on November 20, 2011 by Julie the Workaholic

As I mentioned in yesterday’s post, I was off to the mall this morning to shoot Santa. Yes, with my Canon.  It really was very non violent (and there was some tree hugging, as well.  You’ll understand when you see the picture of Jan). Only one child screamed in fear when Santa got out of the carriage. Not too bad, in my opinion.

Some of you probably already know that I hold two full time jobs; photographer by night, and administrative supervisor at our local hospital by day. My newer readers (please, God, let there be new readers!!!!) probably don’t know that. As a 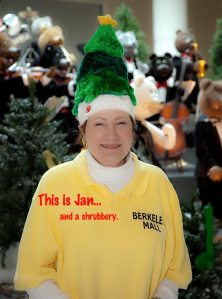 Jan and her seasonally appropriate hat, which I refer to as a shrubbery

small business owner, I have become very involved in our local networking and lead referral group.  I do a lot of work with and for the members of our group, and Jan, Kevin, and Terry are the three I get to see the most of, so it’s a good thing that I actually LIKE them. Can you imagine spending a tremendous amount of time with people you don’t care much for? I can…my last marriage was a lot like that toward the end…but I digress…

Santa arrived promptly at 10:00 a.m., via a beautiful horse drawn carriage. Now, I have to share, here…I love Jan. She is a great person, and a lot of fun to hang out with, and she is also a marketing guru, and the fact that she thinks outside the box, and stretches the boundaries of tradition kind of makes her a hero in my mind.  (Was that the run on sentence from hell, or what? I apologize to all of the English/Grammar teachers who may be reading this…)  She also looks good in a tree.  Anyhow, Jan is the GM at Berkeley Mall, here in Goldsboro, and rather than the traditional Christmas-Carol-fanfare-type of grand entrance for Mr. Kringle, Jan arranged for the Boys and Girls Club Drum Corp to play on Santa’s entrance (which RAWKED, but then the horse got a little spooked, but no harm no foul), and then follow him into the mall to the “Santa Stand,” which is how we referred to it.  Don’t be mistaken…it’s not like a deer stand where one sits all day waiting to take a shot.  Can you imagine? If one manufactured an actual Santa stand, he/she would go broke fast! (Welcome to the dark side of my mind.)

I’m snapping away, Terry is escorting Santa to his area, the kids are playing the drums, and not one child is yelling.  I don’t think one could ask for anything more.  I got the “money shots” that we were looking for, darted around to the front of the mall, captured kids in the horse drawn carriage (another photographerism – no traps or cages involved) for the visual record, and boom.  That quick, we were done.  The four of us thought that lunch might be in order, but I had a previously scheduled lunch date with a new friend, Tricia, and told the other three I didn’t think I could make it.  Long story short, we ended up where I made the date with Tricia about 90 minutes earlier than we had set our date, so I shot her a quick message, and she was able to join us right then.

Prior to her arrival, I bantered with Kevin and his wife, Terry (aka Santa’s one-woman-Secret-Service team).  Now, Kevin and Terry also run a small seasonal decorating business, which appears to to be growing by leaps and bounds. Wait till you see the number they did at the mall for Halloween. It was AWESOME!!!!  Who doesn’t love shuddering, screaming spider-web wrapped people hung from the ceiling by their feet?  Have I mentioned that Halloween is my FAVORITE holiday?  And it’s not even a holiday, really. (Note to self: start petition to make Halloween a federal holiday…)

So we ate, drank and were merry, and then Kevin and Terry had to go, leaving Jan, Tricia, and myself  to visit.  We decided a round of wine would be a good thing, so there we sat, wine in hand, talking like old pals, scheming to take a girls only weekend, a day jaunt to Raleigh, and various other things grown up women do with wine in their hands in public places.  That’s when it happened.  Tricia let it slip that she is a closet event planner.  Jan and I looked at each other, then back at Tricia, and then back at each other. Our networking group doesn’t have an event planner…so we are hoping to coax Tricia out of the closet and into the light.  Now I don’t know about you, but to me? There is nothing better than a few gal-pals sitting around sipping, and visiting, and brainstorming.  Does it get any better than that?  Well, maybe…but only if it rained money at the same time.  (I’m not saying a WORD about well-oiled, half-naked men…I’m not…really.)

So bear with me…I am used to blogging only about appropriate, professional things, as my only other blog IS an appropriate, professional one.  I am getting used to this unfiltered, mind wandering Julie, and hope that you all will join me in actually LIKING her.  I actually prefer this, as I can get my friends’ blogs, businesses, and the like out there to REAL people who aren’t stuffy (stuffy folks don’t read unfiltered Julie, I don’t think).  I don’t think I’ve hit my blog stride just yet, but I am sure working on it.

Mom of three (grown) sons and one (grown) step-daughter, wife of one, friend of many, and owned by seven 4-legged critters, writer, photographer, friend, huge fan of life, and most of all, lover of all things beautiful .….Getting healthy, and hoping to make a dent in the world in a most positive way! (And then there's my alter-ego, the Workaholic, who is me, just unfiltered.)
View all posts by Julie the Workaholic →
This entry was posted in Friends and tagged Berkeley Mall, gal pals, Santa Claus, Seasonal Decorating, wine. Bookmark the permalink.