Posted on December 2, 2011 by Julie the Workaholic

Another update, since I had so many of you asking about the give-away image…

I’ve created a couple of cards with this image on them, so if interested, come see them here.

Another update, cuz I tried Wordle, per one of The Bloggess‘ earlier posts:

So I did this whole Wordle-thing earlier, which required an RSS feed URL (which is strangely Greek to me, so I hit my friend, Google, up for some information, and got an RSS feed to THIS blog (btw, RSS is short for Really Simply Syndication, which is kind of deceiving, because I found it anything BUT simple, but I digress…).  I saw the Wordle creation for Jenny’s (The Bloggess) blog, and it was SUPER cool.  So once I got everything in place, this is how MY blog looks, according to Wordle:

Wake up! I know it's a sleeper...They couldn't even put honey+badger together???

Congratulations to Tracy, who wrote:

“…and things that don’t suck?

That for sure doesn’t suck.

NC State football….ok, we kinda sucked but we’re in a BOWL! woohoo

The smell of the first wax block I put into my scent burner. mmmm mmmm good.

When Toby, my lil shit dog, lays in my lap, puts his head on my tummy and looks like I am God himself. That kind of hero worship never sucks.

Having my daughter look at me with love in her eyes and say, “you’re the prettiest and best mama in the world”.

TOTALLY NON-SUCKAGE!” on the Things That Don’t Suck” entry.  Puffy drew her name for the print give-away.  Congrats!

First of all.  I have only THREE (3) comments in my “Things That Don’t Suck” entry, and one of them is mine. There’s this photo give-away that we are supposed to draw for tonight, from the people who wrote comments. Hmmm…the excitement builds.  It’s either gonna be Squirrel or Elaine, unless you people get on the stick and tell me what doesn’t suck in your lives.

It’s been an interesting week. As you know, I had some tests done at the hospital this week, including blood work, which I hate, because it involves needles.  (Hmmm..This is odd. Tattoos involve needles, but I like THEM…)  At any rate, I get the results from the ultrasound on Wednesday, and everything is fine, which is good, because I have a tendency to stress out until I KNOW it’s all good, or throw myself into a panic, or both.

A few years ago I had my first liver ultra-sound done, ever. Like the idiot that I can be, I look over to the monitor and see this starfish-y looking thing on my liver and it kind of freaked me out, and when I asked the tech what it was, you know, she just gave me one of those stony looks and said something along the lines of she couldn’t really say; someone would be in touch with me.  So I left in a panic, and was telling the girls in the office about the starfish on my liver.  I’m seriously concerned about the star shaped tumor on one of my internal organs.  During this time, I am wanting to Google it so badly, because I know that I will find the answer that I need, but everyone told me NOT to, because that would probably stress me out some more.  So you know what I did? I ignored ’em and Googled it anyhow.  Did y’all know that your pancreas can look a LOT like a starfish when viewed from certain angles? Yeah, me, neither.  Mystery solved, thank you Google.

So back to this week. Johnny calls me and tells me the blood work results are in.  Apparently my blood sugar is just a teensie bit high, and my prostrate is fine.  Am I surprised? No, not really. This is coming from the same office that sends me to an OB/GYN to have a hysterectomy done back in 07, and then, year after stinking year, asks my why haven’t I had a pap smear since 06?  Um, cuz I have no pap to smear, as it were, given YOU REFERRED ME TO A SPECIALIST TO HAVE MY CERVIX REMOVED???????   It’s not like you don’t have all the records right there in front of you.  Why am I on this medication?  I didn’t diagnose my own high blood pressure.  Just sayin’.

Now that we’ve established that my organs and prostate are fine, I can go on with the business of getting together with a couple of the girls for nibbles and wine at our favorite Mexican place.  So this get-together goes amazingly well, and about an hour longer than we had planned. I needed to stop at the store for Johnny on the way home, since I drive right by the shopping center, and I was already out.

You know, that is the LAST time I am going to do the right thing for a while, I think, because, in retrospect, I would be feeling a whole lot better right now if I hadn’t.

Ever see those poor mid-life ladies that fall in the parking lots, or stepping up on the sidewalks?  The ones that you really felt sorry for when you were in your twenties and you asked if they are ok, did they need a hand up, and then walked away knowing that you would NEVER be one of those poor women? 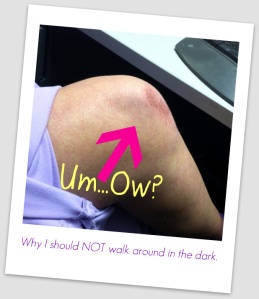 Well guess what?  You WILL be one of those women.  You WILL forget to wear your glasses and find yourself tripping over a bit of sidewalk that you couldn’t tell was maybe 1/2 inch higher than the road because it was dark and your depth perception was a wee bit off.  You WILL be mortified when some twenty-something girl hollers across the parking lot, “MA’AM???  MA’AM, ARE YOU ALRIGHT?” Because, see?  It is at that very moment you realize that you are not twenty-something anymore.  You’re not thirty-something anymore.  You are on the down side of fifty, and you are NOT aging like Valerie Bertinelli. You are now that mid-life woman you felt sorry for twenty-some years ago.

And almost as bad as that realization? The physical impact that you will experience the next day. Sure you probably busted up a knee or two, but honey, let me tell you…While the ice pack last night wasn’t a lot of fun, and the bruising hurt like the devil, there is that whole, “OMG, who beat me in my sleep?” feeling the next day.  WTH is that, anyway??? I took a LOT of tumbles as a kid…and I was NEVER sore like this the day after.

Y’all…this getting older crap, while still better than the alternative?  I think once you hit 40 there should be an instruction manual.  You know…so that we can be prepared for the eventual decline in our ability to right ourselves when we trip, or a little reminder to put the stupid “transitional glasses” on (btw, that’s the PC term for lineless bifocals, people…), and just a gazillion other things that we should be prepared for.  One word: Sneezing.  ‘Nuff said.

Mom of three (grown) sons and one (grown) step-daughter, wife of one, friend of many, and owned by seven 4-legged critters, writer, photographer, friend, huge fan of life, and most of all, lover of all things beautiful .….Getting healthy, and hoping to make a dent in the world in a most positive way! (And then there's my alter-ego, the Workaholic, who is me, just unfiltered.)
View all posts by Julie the Workaholic →
This entry was posted in Suckfest and tagged aging, Falls. Bookmark the permalink.