What a Weekend! Pigs and Pics…

So I had a gig with a local media outlet (www.goldsborodailynews.com) not that I’m dropping names, or anything, LOL, but our 3rd Annual Pig in the Park was on Saturday.  And I burned through a couple of good sized memory cards taking pictures.

We shot vendors, hog cookers (is that the grammatically correct way to refer to these amazing guys that cooked some pig like nobody’s business?), a 10 foot tall cowboy (or he may have been taller, I’m not sure.  I may have to cabbage Tricia’s picture to show you, after he, uh, lasso’d me…Yeah, let me just find that right quick…Ok, there it is…See image to left, LOL…

We saw him as we were first coming into the festival area. I told Tricia that I absolutely needed to come back and find him, because this tall, Godly drink of water was incredibly photo-worthy. Turns out I didn’t have to look for him, huh?

then we got to eat some barbecue.

Now, for those of you who have not been blessed to have the experience of inhaling Eastern North Carolina’s BBQ?  I am going to TRY to explain it, but it really isn’t going to

make it unless you’ve actually sampled it, yourself. These guys grill the hog on some of the largest grills you’ve ever seen. Now, unlike a lot of regional bbq from west of here, tomato based sauce is not used. A vinegar based sauce is the weapon of choice out here in Eastern North Carolina, and I can’t speak for anyone else, I can only go by the sauce I have made using the recipe my mother-in-law gave me, but I am head over for this, even though I was born and raised on the left coast. 🙂  Vinegar, red pepper flakes, sugar, brown sugar, and that’s all I am going to give you. 🙂 But I’m quite sure if you google it…(just sayin’…).

Now, while there, we also had the opportunity to capture the Malpass Brothers, who are a local big deal, in country music circles. I understand they’ve toured with Merle Haggard and their video was up there on CMT. (Ok, and on a personal note, I am LOVING their song, “Memory That Bad,” and I am not the biggest country music fan you’ve ever met, but this song just gets me…)

Having had the pleasure of shooting a benefit for Samantha Casey of Samantha Casey and the Blue Grass Jam last fall, I was able to capture these guys for the first time. To say that they love the camera would be an understatement. If appearance is any indication, these brothers really enjoy performing as much as THIS girl really enjoys her photography. 🙂

Before the Malpass Brothers took the stage the Mighty Saints of Soul performed, and they played some amazing old school beach music and some contemporary hits with a twist.

All in all, I had a blast!  I caught up with friends I hadn’t seen in a very long time, made new friends, listened to great music, shot some really fun images, and can’t wait till next year. 🙂

That said, sometimes you get a picture that is probably more wrong than most, on any level (I’m sure you remember Santa giving me the bird?), and you KNOW you should probably delete it, but then your inner voice tells you not to, given that the image might save someone else from making the same mistake and you have pretty much talked yourself into getting rid of the faces, but saving the rest, because it is, after all, a public service announcement: 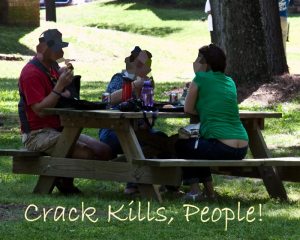 Mom of three (grown) sons and one (grown) step-daughter, wife of one, friend of many, and owned by seven 4-legged critters, writer, photographer, friend, huge fan of life, and most of all, lover of all things beautiful .….Getting healthy, and hoping to make a dent in the world in a most positive way! (And then there's my alter-ego, the Workaholic, who is me, just unfiltered.)
View all posts by Julie the Workaholic →
This entry was posted in Of Interest and tagged Eastern NC BBQ, Goldsboro Daily News, Malpass Brothers, Pig in the Park, Wall 2 Wall Photography. Bookmark the permalink.

7 Responses to What a Weekend! Pigs and Pics…