Posted on December 14, 2012 by Julie the Workaholic 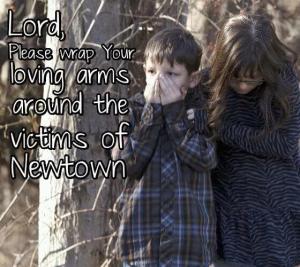 I am angry. No, not angry; I’m mad as hell, pissed off, furious.

I have shed tears for people I’ve never met.

I have cried for the children at Sandy Hook Elementary School in Newtown, Connecticut. I’ve cried for their parents, brothers and sisters. I’ve bawled for the teachers and principal that tried to protect these children. I’m wiping tears for the surviving children that will have a hard time getting through the coming hours, days, months, and years. My heart breaks and I cry some more for the first responders and LEO’s that arrived on scene only to find the little bodies of the youngest victims of this unthinkable act of violence in those classrooms.

What the HELL is wrong with people? You have a death wish? Kill yourself, for Gawd’s sake, but leave everyone else alone!

Why did this guy feel he had to go the the elementary school where his mother worked to kill her and her students?

It’s not fair. Parents send their children to school with an apparently false sense of security and “knowledge” that their babies will be safe and that they will come home to them safely at the end of the day.

The whack job up in Newtown showed us all that this is not the case.

I am not minimizing the violence in Oregon on Tuesday, the temple shooting in Wisconsin, the Aurora theater massacre, or – reaching back a number of years – the violence at Columbine High School, but to take the lives of small children? Honesty? While I normally don’t say much about religion, sometimes I honestly believe that there is a special place in hell for the killers of children.

What do we do?

I can’t say that I believe that making it harder for law abiding citizens to obtain firearms is the answer. Thugs and whack jobs will still get their hands on guns, and I believe in the right of the ordinary man to protect himself.

Unless you are going to go house to house and take ALL firearms, gun control isn’t going to work.

Do we place metal detectors in all malls, schools, theaters? I don’t know.

Do we put School Resource Officers in every learning facility in the country? Dammit, I don’t know.

Stop playing the Republican/Democrat card. Pull together as a united country and DO something. Forget the political lines and step up to the plate as Americans and take back the country.

Is it a lack of help for the mentally ill, or the people that are simply at the ends of their ropes? I don’t know.

My thoughts and prayers go out to everyone who has lost a loved one today.

I sit here, amazed at the senseless violence that played out earlier today, with most of the rest of the country, and have (for once) little more to say.

UPDATED Saturday, 12/15/12: Overnight new details came out, which makes the entire situation even worse and more confusing than when I posted this last night.

This boy’s mother was killed in their home. He shot her point blank and THEN went to the school. We further learned, according to news outlets, that she wasn’t employed at the school. This makes it so much worse. One might actually be able to wrap one’s mind around the scenario that many of us thought had played out last night, but for him to simply go to the school and deliberately go after those children? This fact is infinitely worse, and our country is grappling to come to terms with the tragedy, and I fear we will never have the answers that we want.

Mom of three (grown) sons and one (grown) step-daughter, wife of one, friend of many, and owned by seven 4-legged critters, writer, photographer, friend, huge fan of life, and most of all, lover of all things beautiful .….Getting healthy, and hoping to make a dent in the world in a most positive way! (And then there's my alter-ego, the Workaholic, who is me, just unfiltered.)
View all posts by Julie the Workaholic →
This entry was posted in Seriously? WTF and tagged change, mass shootings, Newtown Connecticut, Sandy Hook Elementary School, Senseless violence. Bookmark the permalink.