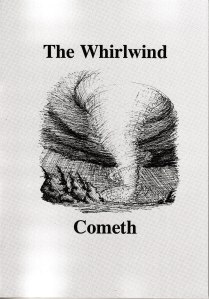 Image obtained from kingdomreading.com and looks much like my life has felt over the past three weeks.

I can’t believe it’s been almost three weeks since I put a blog up here.

To say that it has been crazy-busy is probably an understatement.

Well, let’s start with the “kids,” both the furry four legged ones and the two legged adult ones, yes?

My mamma-dog, and canine bestie, Belle, has had a kidney bean sized lump on her left hip for some time and I have been keeping up with it, looking for changes. The day of the 5K we returned and found that the little bump had grown to the size of a ping-pong ball virtually overnight! By the following day, the day I posted my last blog entry, it had swollen further, and Belle was acting like she didn’t feel well, so the next day, we called our vet, and got her in as soon as we could. The vet checked her out and had some ideas of what it might be, but wasn’t terribly sure at that point, so prescribed a pain killer, steroid, and antibiotic and scheduled us to return the following week. They also drew a circle around the swollen area and told us that if the swelling exceeded the drawn outline we were to call them, and they sent us home with Belle wearing an e-collar, aka the cone of shame. Got her home, comfortable, and drugged (little, single-serve cans of Chef Michael’s food are ideal for disguising meds), we sat down and watched movies. I was on “vacation,” since I hadn’t taken any time off since the New Year’s holiday, and wasn’t due to go back to work until Wednesday. After watching one movie, we flipped over to local television and that was when we found out about the explosions at the Boston Marathon. Needless to say, I was fairly glued to that for a while. 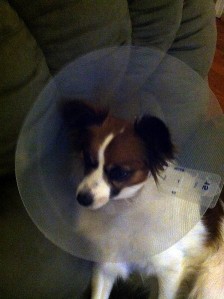 The cone of shame. Poor baby…

The following day was uneventful, but by Wednesday morning, while I was getting ready for work, we noticed Belle’s swelling had gone beyond the lines, so we called the vet, and the doctor wouldn’t be in until 8:30, so I went on to the office and came back home mid-day to get her back to the vet. The area was starting to … well… leak and I wrapped her in a towel and off to the vet we went. In the two minutes it took to get there, this thing literally burst, soaking through the towel and my clothes. The vet scheduled her for surgery the next day and gave us a second antibiotic. At this point, she thought that it might be a spider bite, completely unrelated to the initial tiny lump, but they were going to do a culture and a biopsy from the tissue removed during the surgery. By now, I am doing well not to go to pieces, because Belle’s nickname is “Best Girl,” and it’s for a reason. She’s only eight, and the idea of something happening to my best girl was not something I wanted to entertain at all.

Thursday morning we get her to the vet and are told we can call anytime after 3:30 and can pick her up after 5:00. Fair enough. Off to work I go.

Later that day, I got a phone call from the Middle Son’s attorney’s office. It was the secretary, who told me that Middle Son would be going before the judge that afternoon and that I should be getting a phone call to come get him or at least a status update. As I was getting ready to walk out the door to leave work, the phone rang and the secretary was on the other end. Seems Middle Son said something the judge didn’t like and wasn’t going to be getting out on that day. She made sure to tell me that she could not divulge the details and that they would try to get him back in front of the judge the following Monday or the one after that.

That evening, after getting Belle back home with instructions to keep her as still as possible, I got a call from Middle Son, who was beating himself up for not lying to the judge. Seems that he would accept responsibility for one of the three charges, and the attorney had brought him a plea to sign and told him if he signed it he could go home. All Middle Son could hear was “go home,” and apparently didn’t absorb which charge he was taking the plea for, and then signed. They got in front of the judge and His Honor asked Middle Son if he was guilty of said charge. Middle Son hesitated before stating yes, because the charge on the plea was not actually the one he committed. The judge saw his hesitation and reminded him that he was under oath and asked him again if he was guilty of said charge. Middle Son said no, and back to jail he went, his public defender mad as hell. He was really upset that he’d blown his chance to get out. After all, he’d been there over four months and REALLY wanted to go home.

Saturday morning I got up, got dressed, inhaled my daily quota of coffee and did my usual – spent my morning at the county detention center and visited with Middle Son, who was still really feeling dumb for not just taking the plea. After having almost zero interaction with his public defender since December 18 (I guess a 10 minute visit that day counts as almost zero), he was pretty ready to fire him and get a new defender. He had is written complaint ready for me to send to the state bar. Of course, he’s got to mail it to me, given you are separated by glass and can’t pass ANYTHING back and forth. Yeah, I know. That goes without saying.

After having previewed this, I see where this has gotten tremendously long, soooo…I will wrap up part one, and will write the rest in another installment or two.

Coming up – Wedding or not, lifting again (finally), getting out, high school senior stuff, adventures in calorie counting, and my favorite motivational fitness blogs.

Mom of three (grown) sons and one (grown) step-daughter, wife of one, friend of many, and owned by seven 4-legged critters, writer, photographer, friend, huge fan of life, and most of all, lover of all things beautiful .….Getting healthy, and hoping to make a dent in the world in a most positive way! (And then there's my alter-ego, the Workaholic, who is me, just unfiltered.)
View all posts by Julie the Workaholic →
This entry was posted in Uncategorized and tagged busy, incarceration, pets, vets. Bookmark the permalink.

4 Responses to Playing Catch-Up…Part I