Posted on March 6, 2014 by Julie the Workaholic 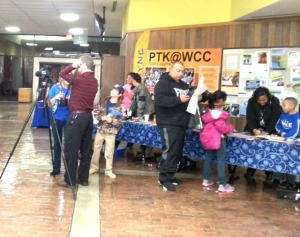 I have not been an avid American Idol watcher in several years. This season, however, two noteworthy items have piqued my interest.

The first is Harry Connick Junior. I’m sorry. I find him ridiculously good looking, and …yeah… I think he sings, too, or something, right? 😉 To see that he is a judge this season? Okay. I’m always down with twice-per-week eye candy.

The second is Majesty Rose. She’s a local girl from right here in little old Goldsboro, North Carolina. Now, some of you may remember a kid named Scotty McCreery? He won Idol a few seasons ago, and he came from a little town right up the road from here, and that town, Garner, made a big ol’ hairy deal out of their local guy, which is terrific. Supporting the arts is great. Supporting local artists is wonderful!

This young lady is known in certain circles at work because a lot of people either go to church with her, or have visited her home church. My girlfriend, Lesley, works at an assisted living facility where a group of young people would come to sing for the residents. One of the girls in the group was Majesty. This group also performed at our local National Day of Prayer downtown last fall, and I had the privilege of grabbing my camera and joining my photography-bestie to shoot the entire event. I’m sitting on a ton of images of Majesty and her group singing on the square that night. I may dig those out and share them with you. 😉

That said, last night I wandered out to the local college, where our local celebrity had been a student, for my first ever fan-girly experience. I met up with Lesley and proceeded into the atrium for my first of (hopefully) many viewing parties. 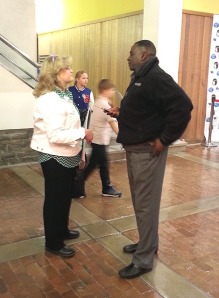 Cameras were everywhere! Lesley, who had gone to the results viewing party at the YMCA last week, told me under no circumstances should I scratch my butt, pick my nose, or do anything that I might not want to be seen all over the local area because one never knows when they might show up on the local news or in the paper. We saw a local news personality out of Raleigh, photographers from the Goldsboro news outlets, and more DSLR’s than you could shake a stick at. Of course, the photographer in me drooled over a lot of the cameras out there!

Taking a trip down Memory Lane…

It was a pretty healthy turnout, considering how big Goldsboro is and I had a lot of fun while I was there. It’s really a neat thing when a community comes together to support one of their own. After the initial “pep-rally” we all moved into the Moffatt Auditorium to watch the live show on the big screen. During commercial breaks there were interviews with college faculty, former classmates, and friends who talked about how they knew Majesty.

After the show was over, Lesley and I agreed to meet at the YMCA for the results party, which I am about to go get ready for (I’m still sitting here in my work scrubs), but will be back later this evening to let you know how that went.

In the meantime, I will leave you with THIS LINK that goes to our local CBS affiliate. There should be a video from their site of the piece they did last night. If you pay close attention, you might see me. I make a cameo appearance at about position 0:39. I’m the one in the teal scarf in the upper right-ish area. Good thing I kept my hands in socially acceptable places, LOL…

9:50 p.m. update: We spent the evening at the YMCA to see if Majesty was going to go on to the next round. She did. I also met the mayor, who is a very nice man. I took lots of pictures, though they are still on my phone, and will publish a post on this tomorrow. I’m going to start a “Community Unity” series that focuses on the coming together of residents from all walks of life for a common interest, so be on the lookout for that.

Mom of three (grown) sons and one (grown) step-daughter, wife of one, friend of many, and owned by seven 4-legged critters, writer, photographer, friend, huge fan of life, and most of all, lover of all things beautiful .….Getting healthy, and hoping to make a dent in the world in a most positive way! (And then there's my alter-ego, the Workaholic, who is me, just unfiltered.)
View all posts by Julie the Workaholic →
This entry was posted in Current Events, Of Interest and tagged American Idol, community, Goldsboro, Majesty Rose, Viewing Party. Bookmark the permalink.

Leave a Reply to Julie the Workaholic Cancel reply