A Wrap-Up of Sorts

I apologize for being slack on responding to comments since the other night. I lived through my dental adventures, obviously, LOL. I can say that while effective, Valium + Nitrous was not as memory blurring as Halcyon + Nitrous. I can give you a blow by blow of the whole thing, which I won’t, but I can say I cracked myself up a couple of times while I was inhaling the laughing gas.

The cavity was the first order of business, so when the drill came out, the volume on my music player went up. I had cued up a huge Coldplay playlist on my phone, hoping that it wouldn’t be such a bad experience that I would flash back every I heard one of their songs. I worried needlessly about that. So the dentist went to drilling, and I went to mentally going elsewhere. Before I knew it he was done and the assistant was putting the filling stuff in my tooth, however it is that they do it. I opened my eyes a couple of times to see some sort of bands or something in the pliers, and inadvertently ran my tongue over the area. All that went through my head was, “Franken-mouth” and I giggled. Literally. I hope they get that a lot. Then I thought that part was over, but nooooo. The dentist came back and drilled some more, and I had a very tacky thought about being drilled twice in a short time and knowing this was the closest to being a porn star I would ever get, LOL…And then I giggled out loud again. Then there was the deep cleaning, which was no biggie because I couldn’t feel anything, anyway. And then the dreaded tooth extraction…

I’m thinking back to that nightmare extraction from all those many years ago, and when he started pulling, my snaggle tooth started to creak, and then pressure, and another pretty loud sounding creak. At this point I clutched the armrest with white knuckles, and the assistant said, “All done!” And I drooled out, “Really?” and she told me yes, at which point I blurted out, “OMG, I LOOOVE you guys!” She just laughed and said they loved me, too. 😀 I mean, what? Done in just a couple of minutes? How is that even possible? So they sent me home with a prescription for something of a narcotic nature, and a Valium for part two next month.

I got to the house by one-thirty or so, put my jammies on, popped a pain pill because the feeling was starting to come back in my face and promptly drifted off to sleep for a couple hours. I woke up not feeling too bad, and figured I’d skip then next hydrocodone. THAT wasn’t wise. By the time I’d realized my mistake, it was too late.

Woke up this morning not feeling too terrible – kind of like I’d been the recipient of a mean right hook to the jaw. The hubs had an appointment for a contrast CT scan at the hospital, so I went with him to keep him company because that is kind of a long, drawn out thing. It takes two hours to drink the contrast, then he was able to do the scan. We then went off to the store to pick up a few things, and while there I snagged some seeds for the garden: 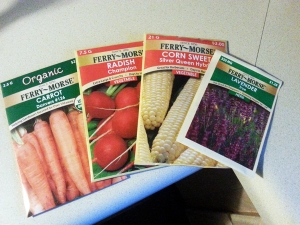 These are going to provide veggies this summer!

Then, as we were leaving, I told Johnny to stop the truck…I wanted to get a picture of the ducks. He stopped and started looking toward the sky, and I told him, “Dude, NO….over THERE! And I pointed and this is what we saw… 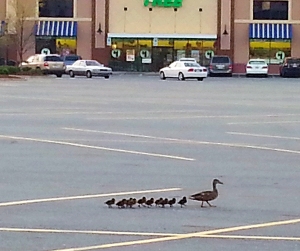 Why are they even IN the parking lot????

…in the dadgummed WalMart parking lot. We stopped, a grandmotherly looking lady stopped and we kind of kept an eye on them.

I swear, the things we see, sometimes. I hope they got where they needed to get without incident.

I apologize if this is rambling, long, and bizarre. I’m still a hair on the dopey side, but I’m simply happy that I ate some solid food this evening. I had six fish sticks. That kind of hurt a little, so I rewarded myself with some ice cream with (MMMMmmmm) Redi-Whip on top. Pudding is good, I love Jell-O, but give me some good old fashioned food that I can chew without pain. Maybe tomorrow…?

Mom of three (grown) sons and one (grown) step-daughter, wife of one, friend of many, and owned by seven 4-legged critters, writer, photographer, friend, huge fan of life, and most of all, lover of all things beautiful .….Getting healthy, and hoping to make a dent in the world in a most positive way! (And then there's my alter-ego, the Workaholic, who is me, just unfiltered.)
View all posts by Julie the Workaholic →
This entry was posted in Random Thoughts, Uncategorized and tagged ducklings, Great Dentist, Tooth extraction, Valium & Nitrous Oxide. Bookmark the permalink.

33 Responses to A Wrap-Up of Sorts