Adventures in Mead (aka Honey Wine)

Posted on January 6, 2015 by Julie the Workaholic

The honey pot, if you will…

Once we got our second (and final) batch of 2014 Hell Hath No Fury Red racked, I decided to go ahead and start a batch of Mead.

We’d gone to our favorite supply place (Raleigh’s American Brewmaster) to pick up a three gallon carboy, some malic and tartaric acids, some Fermax yeast nutrient, yeast, tannin and another airlock on Saturday. Imagine our surprise when we saw they had honey, so we picked up six pounds of mixed wildflower. Yum!

Once we got our second batch of HHNFR into the big carboy, we noticed that there was a LOT more head space in that carboy than there was in the first batch. Derp…we didn’t add any water, so I added two bottles of Deer Park spring water to bring the liquid level up. For the life of me, everyone remembers us adding water after racking except me. (Note to self: Do not DRINK wine while you MAKE wine. SMDH…)

At any rate…Mead…that’s why I’m here, tonight.

There are as many “correct” ways to make Mead as there are Mead-makers, so there is no one “RIGHT way” to do it. Some recipes will have you boiling your honey. Other recipes will tell you NOT to boil your honey, as you are doing a serious disservice to the bees. Me?

I have a killer book of wine recipes and chose to follow the dry Mead recipe therein:

I stirred hot water into the honey to dissolve honey. (I poured the water into sterilized pots and brought them to just shy of boiling.) This can be done in the primary fermentation bucket. Added remaining ingredients EXCEPT yeast. Stirred. Left 24 hours. (Starting SG was 1.120)

Nothing happened. Seriously. NOTHING.

After 24 hours I pitched my yeast by mixing the Red Star Champagne yeast per the package directions with warm water to activate. Let sit no more than 30 minutes, then added equal amount of mead must. Let stand till about doubled, then pour, evenly, over top of must. Cover. (Except that the mixture didn’t increase in volume like it did when I made starter for the HHNF Red. But, ok…pressed on…)

The day after pitching my yeast, I stirred and checked specific gravity. In my case, NOTHING happened. SG didn’t change. At ALL. It remained 1.120. Dammit.

I dissolved a packet of Lalvin RC212 in four ounces of water (temp about 108 degrees F), let sit for about 25 minutes and then added four ounces of must to make a starter. Again, unlike grape must yeast starter, this did not double (let alone triple) in the measuring cup. I pitched the yeast starter again. I covered the primary and walked away.

We stirred today and it is bubbling, like a soda bubbles after you open the top. Sort of. Checked specific gravity. YES! It moved a little. It is now at 1.110. I read where you can add a handful of raisins (I’m going to use golden raisins so that the color isn’t altered) to increase the sugar to get that yeast working well, because sometimes honey is hard to get along with if you are yeast. Apparently there are properties in honey that can be a bit resistant to yeast, and I’m okay with that…It’s a learning experience. And am I ever learning. Puts shame to my fourth generation status, however. 😉

So here what happens to a barely bubbly mead must when you throw in a handful of golden raisins, y’all:

I have also decided to spice this virgin batch of mead with orange peel, cinnamon sticks and whole cloves. Because spice in anything? It’s a good thing. 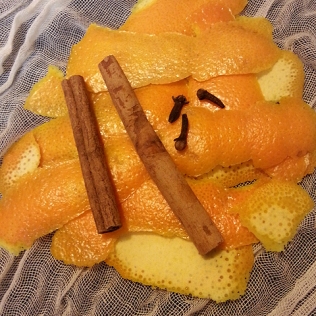 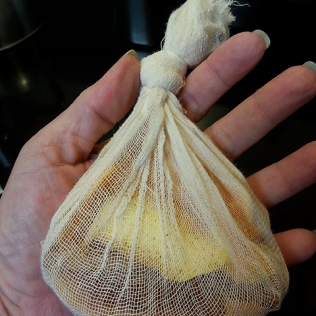 All tied up…Wish us luck.

I will keep you posted.

Mom of three (grown) sons and one (grown) step-daughter, wife of one, friend of many, and owned by seven 4-legged critters, writer, photographer, friend, huge fan of life, and most of all, lover of all things beautiful .….Getting healthy, and hoping to make a dent in the world in a most positive way! (And then there's my alter-ego, the Workaholic, who is me, just unfiltered.)
View all posts by Julie the Workaholic →
This entry was posted in DIY, HomeMade, Of Interest, Wine and tagged first mead adventure, honey wine, Mead, spice in mead, wine making. Bookmark the permalink.

4 Responses to Adventures in Mead (aka Honey Wine)