The More I Get to Know People…

…the more I appreciate my canine friends.

Because paw prints on our hearts…

Now that I have calmed down (or am simply too tired to fuss much after being up most of the night), I will tell you the rest of the story.

As tired as I was, I was so fezzed up that I knew I wouldn’t go to sleep until I had chilled out a little bit, and venting about idiot dog owners on my blog is a surefire way for me to let off a little steam.

Once we realized the white pit puppy was back, we hoped that perhaps she and Hero would become fast friends and settle down for the night.

Well, only half of that actually happened. Apparently they became very good friends, but as to whether they settled down? Not so much. We’d put a bowl of food (metal – lesson learned) and a bowl of water (plastic) out for them.

Things got quiet on the porch. For short periods of time, that is. Every little bit you could hear them playing, then the bowl (metal) bouncing around the porch (concrete). All. Night. Long.

A short time later, (read: all too soon) the alarm went off and it was time to go get Hero to his people before they all took off for work.  The pit was still there, Hero was happy to see me, and both were so excited that they almost knocked me down the porch steps. (Can you imagine the skull fracture that would have created?)

At any rate, we got Hero into the truck, with Pit right behind us, so Johnny secured the pit to the porch so she wouldn’t chase the truck down the road and we went off in search of awake people at Hero’s place. His mom was home and we explained to her what had transpired since last night and we got her number in case he shows up again. She thinks that perhaps because his fur is so darned thick around his collar area that the prongs from the invisible fence aren’t affecting him. She said they’ll trim his neck up a little bit to see if that helps.

Now, I have a friend that has GSDs, and she is fairly certain that a little zing isn’t going to phase them, so we shall see.

We get home and my husband takes the pit girl to Pat’s. 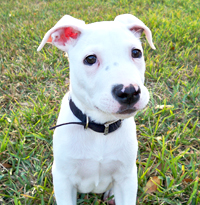 What’s not to love? So TAKE CARE OF HER!

See what I mean?

So Johnny gets her home and Pat snatches her from Johnny and basically slings her into the house and gets a crate and puts it inside also. Johnny tried to explain how we tried to get up with them last night, how Hero is a visitor and harmless, and that they both stayed on the porch last night.

Do you know he did not even get a thank you?

It’s this kind of thing that hurts my heart to think about. That poor sweet little puppy…all she wants is love and attention, and instead? She got Pat. 😡

I know I’m going on little sleep, so I may be just a hair more sensitive than usual today, but I can’t stand thinking about it.

I know that some of you that have been reading/following/commenting love and have pits and I am just so discouraged by people that don’t GET the responsibility that comes with owning a dog.

Okay, so my break is over and I need to get back to work, but that is how it all played out.

On the bright side? Only 3.5 hours till I can go home and take a nap.

Mom of three (grown) sons and one (grown) step-daughter, wife of one, friend of many, and owned by seven 4-legged critters, writer, photographer, friend, huge fan of life, and most of all, lover of all things beautiful .….Getting healthy, and hoping to make a dent in the world in a most positive way! (And then there's my alter-ego, the Workaholic, who is me, just unfiltered.)
View all posts by Julie the Workaholic →
This entry was posted in In the Yard, Of Interest, The Neighbors and tagged Mind your dog, Responsible dog owners. Bookmark the permalink.

4 Responses to The More I Get to Know People…