Got it and LOVE it!

I was on the Fitbit website last week because I needed a new wrist strap for my One and saw that they had come out with a few new models over at Fitbit Central.

I remembered seeing my sister post about obtaining one, recently, and asked her if she’d gotten the Charge HR and how she liked it. (I figured it was the HR because she had been experiencing some issues with her wrist-worn HRM.)

I went ahead and ordered one through Amazon (because Prime & free 2 day shipping, yo!), because it looked like something I would really like. I’d been considering going to a Flex, because a wrist worn device would definitely benefit me. (Ever worn a dress, then tried to put the clip on pantyhose? Yeah, no thanks.)

My sister had, indeed, gotten the Charge HR, but has some concerns regarding the workout calories burned. The Charge’s calorie burns are less than her Wii program’s esitmate (based on height and weight). Now, I go by MFP burn numbers, with the knowledge that they are probably over-estimated, and try to make sure that my intake is less than or equal to what my old Fitbit One displayed. (Based on if I was trying to lose, or maintain.)

My Charge HR arrived on Friday, and here are my observations, thus far, after having used the One for a year and a half:

While I was initially charging my HR, I was reading the forums over at Fitbit regarding the Charge HR, and there have been a lot of issues. Forewarned is forearmed, so I have been more than a little on the look-out for issues. To date? I haven’t had any problems. 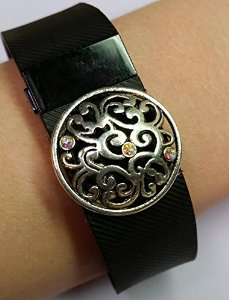 I can see where I could/would totally use something like this!

So, while I was off Googling something else on Amazon, last night, I found that I can get all sorts of bling for my wrist band, which may not be considered “fashionable” in some circles. I’m fortunate in that I work in healthcare and they are ENCOURAGING us to be more healthy, but I did find some cool stuff to deck out my wristband with.

I also learned that I can use two devices, though not at the same time. For example, if I wanted to NOT wear the wristband to some formal-thing, I could use my One clipped to a skirt (or bra strap, or whatever) and it will still sync to my dashboard over at Fitbit.com. If a Charge HR is going to be a replacement device you CAN swap them out, so that was a plus for me.

If you are looking for a new tracking device or a replacement Fitbit, I highly recommend the Charge HR!

Mom of three (grown) sons and one (grown) step-daughter, wife of one, friend of many, and owned by seven 4-legged critters, writer, photographer, friend, huge fan of life, and most of all, lover of all things beautiful .….Getting healthy, and hoping to make a dent in the world in a most positive way! (And then there's my alter-ego, the Workaholic, who is me, just unfiltered.)
View all posts by Julie the Workaholic →
This entry was posted in Fitness, Health, Of Interest and tagged Fitbit, Fitbit Charge HR, Fitbit review, fitness, replacement tracker, Tracking device. Bookmark the permalink.