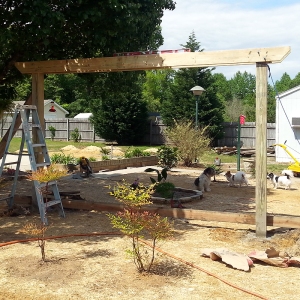 You, too, can have one of these. Be prepared for heavy, arguments, and possible divorce. 😉

Holy Moses! I don’t know about y’all, but I think I’m getting WAY too old for this manual labor crap…

Soooo, this morning, after being a little slow going, the hubs and I got up and headed out to our local Builder’s Discount Center and got what we needed to put this project together:

We started the project at noon. Thank goodness we have a tractor with a front end loader, because that’s how we got those heavy-ass beams from the back of the truck to the site. 😉 And then to where they needed to be by the holes. And how the entire assembly got flipped, then flipped again and into the holes. If you have 2-3 able bodied people, you can do this without a tractor, but there was only one almost able-bodied person, and that was me, ha ha. Like I said…I’m seriously glad we have our tractor. That crazy thing has paid for itself a few times over.

Probably good that we got all that rain; the soil was workable.

Once we got the lumber where we needed it, Johnny used a circular saw to trim the beams to ten feet. While he did that, I got the post hole digger and started in on the two 2-feet deep holes. We set them twelve feet apart.

It took a little while for me to get them deep enough, and even though I lift weights, I was no match for a post hole digger. I really hate that thing. My shoulders hate me as a result, ha ha… It took a lot longer than I thought it would, and while I thought I was in fairly good shape? I was panting like a dog by the time the first one was dug.

Trimming to the correct height.

Once both holes were dug and both beams were cut to size (Johnny actually cut one about six inches longer than the other because he took the slope of the ground into account; it’s good to have a smart spouse) we moved the beams to the holes.

Then we grabbed the 2x8x16 boards and cut our angles. I want  a nice Asian/tropical look for this overhaul, so we measured two inches down and then cut a 45 degree angle on each side of both boards once they were measured down to about 14′ 2″, which gave us a one foot over-hang past each beam. 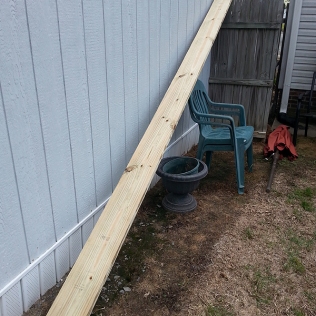 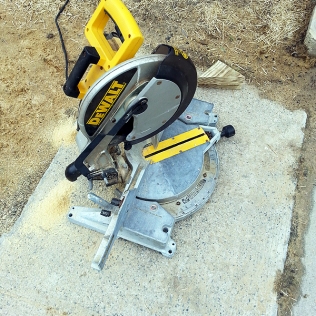 I love our miter saw! 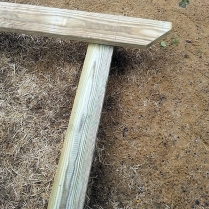 Second board attached after flipping the whole mess. 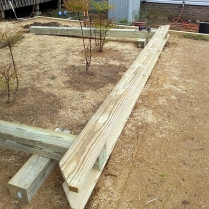 After flipping it back…

Once we got the first board fastened to the top of the two beams using the screws we picked up, we had to lift and flip the whole assembly, attach the second board, then flip that puppy back to its original position. I think I may have mentioned just how thankful I am that we have our little tractor with the front end loader. It would not have happened, otherwise…

At this point, we drilled the holes for the carriage bolts and figured we’d do well to just get the whole thing into the holes and fairly situated before attempting to install the bolts. 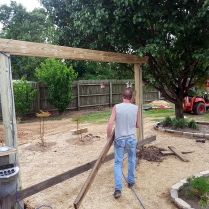 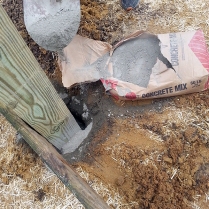 Concrete for the win! 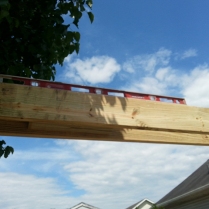 Sadly, I couldn’t pull the rope and take pictures of the process at the same time, but that front end loader got the job done. We shifted the posts and I wiggled those heavy boogers until everything was fairly level all the way around.

I filled the holes with concrete, watered them in, wiggled the beams a bit, poked the shovel around some, wiggled some more, added more water, and Johnny ensured we were level across the board.

Here is a slide show of all the pictures I managed to get during the process:

Now all we have to do is wait until tomorrow, when the concrete has done its thing, the beams won’t go anywhere, and we can put the eye-bolts in and hang the hammock.

Mom of three (grown) sons and one (grown) step-daughter, wife of one, friend of many, and owned by seven 4-legged critters, writer, photographer, friend, huge fan of life, and most of all, lover of all things beautiful .….Getting healthy, and hoping to make a dent in the world in a most positive way! (And then there's my alter-ego, the Workaholic, who is me, just unfiltered.)
View all posts by Julie the Workaholic →
This entry was posted in DIY, Home Improvement, HomeMade, In the Yard, Of Interest and tagged Asian inspired hammock/swing arbor, DIY, do it yourself, hammock arbor, hammock stand. Bookmark the permalink.

4 Responses to The Hammock Arbor…Part One