The Playground and Then Some…

Posted on November 22, 2015 by Julie the Workaholic

So we arrived at the playground site shortly after 0630 last Saturday, the 14th.

The hubs was the mulch team captain and I got sidetracked by registration and some other administrative stuff (counting who came from where), so I didn’t get to mulch until well after ten o’clock.

This is how it turned out:

So this week, after working all day, most days, I did some more candles. Soy wax is amazing to work with.

Until you try to make a pillar candle the first time. I used duct (duck?) tape to secure and seal my mold but it didn’t exactly come out like I’d hoped. I put the following on Instagram and tagged it #pillarfail:

See what I mean? What should have been a 6″ pillar ended up at 3″ and then the other half of the wax ended up in a few clam shell molds for wax melts.

This weekend I got busy with the candles, body butter, sugar scrub, and bread.

I got an early Christmas present by way of a KitchenAide mixer and went a bit crazy, going all Domestic Goddess on the hubs. It’s Sunday night and I’ve started sour dough starter, and baked two loaves of whole wheat bread and two loaves of discard sour dough white bread, plus numerous candles (including pillars that I plugged off with plumber’s putty, which is da bomb!), and spearmint body butter and sugar scrubs. I labeled all the candles, scrubs, and lotions, boxed what needed to be boxed and pretty much kicked my feet up today. 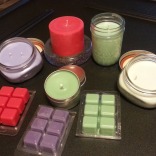 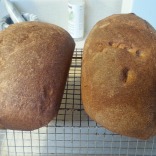 I am also working on post-processing a friend’s fashion show, and hope to have those images done by Thanksgiving.

Mom of three (grown) sons and one (grown) step-daughter, wife of one, friend of many, and owned by seven 4-legged critters, writer, photographer, friend, huge fan of life, and most of all, lover of all things beautiful .….Getting healthy, and hoping to make a dent in the world in a most positive way! (And then there's my alter-ego, the Workaholic, who is me, just unfiltered.)
View all posts by Julie the Workaholic →
This entry was posted in Cooking, DIY, Family, HomeMade and tagged body butter, bread making, KaBoom Playgrounds, soy candles, sugar scrub. Bookmark the permalink.