Posted on January 31, 2016 by Julie the Workaholic

So I went down hard with a stomach bug last week and spent waaaay too much time on YouTube watching nail art how-to videos. 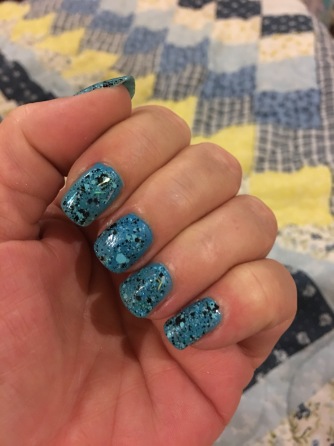 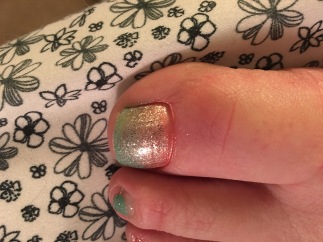 And I messed around with my daughter’s polish stash, as you can see above.
Then I broke my pinkie nail on Thursday night: 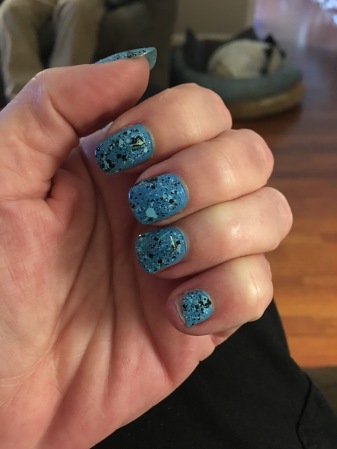 I don’t always break a nail to the quick, but when I do? It is right after my first mani in a year!

So I decided to take a cheat from one of my newly found YouTube nail gurus and glued on a fake.

I wanted to do a gradient, but had no latex cuticle barrier, so made nail decal, or ten. They came out like this: 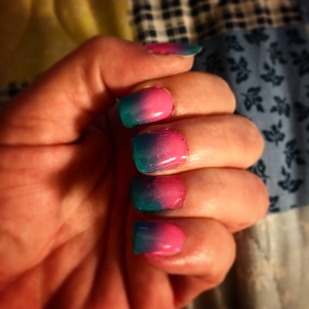 But then we bottled wine, I didn’t don gloves and had my nails in sanitizer all afternoon.

So I killed that mani and thought I would do a cool chevron patrern. Except that I purchased cheap vinyls and they opted not to sick (the few I was actually able to peel off the backing.) (These would be Kiss Design Perfection2, picked up at Walmart earlier today.) There is an email to them forthcoming.

So the chevron idea I had died on the vine, and I was able to get the French mani curves off of the paper backing an came up with the following, that I don’t love, but it is too late to change it now: 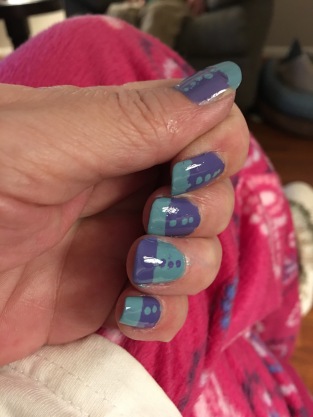 So, as my designs evolve, I will share here.

Next time? I finally got around to getting my pistol purchase permit.

Mom of three (grown) sons and one (grown) step-daughter, wife of one, friend of many, and owned by seven 4-legged critters, writer, photographer, friend, huge fan of life, and most of all, lover of all things beautiful .….Getting healthy, and hoping to make a dent in the world in a most positive way! (And then there's my alter-ego, the Workaholic, who is me, just unfiltered.)
View all posts by Julie the Workaholic →
This entry was posted in Creativity, HomeMade, Life’s Little Victories, Uncategorized and tagged manicure, nail art, nails. Bookmark the permalink.

5 Responses to My Nails!