Posted on March 2, 2016 by Julie the Workaholic 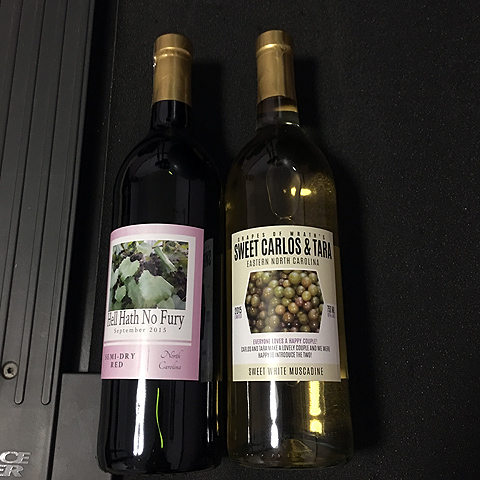 So it’s been exactly a month since I’ve posted, and for that? I apologize.

So I got very little response on my request for a name for our sweet deep purple muscadine wine, made from Supreme and Nesbit fruit.

My soon-to-be daughter-in-law and I came up with a name together; Nicky’s Sweet Purple Haze. 🙂 And now she gets an extra bottle of wine! 🙂

That said, this evening I put it out there on Instagram and Facebook that I am going to award the person that can submit a good name for the current wine we are about to rack tonight:  A robust blush made from the skins/hulls of the Carlos/Tara grape, plus a few pounds of the skins, hulls and juice of Supreme and Nesbit Muscadines, and a few more pounds of the slings, hulls and juice of the Noble Muscadine. So, if any of y’all have any ideas for a name? You pick a winner and you’ll get a bottle of blush…

Gonna be a killer blush!

So you can kind of see the difference in color between the red, above, and the blush, to the right.

We also bottled four gallons of “Hell Hath No Fury Red” v. 3.0, as well as the “Sweet Carlos & Tara.” We also did a gallon of blackberry, which was unnamed, because five bottles did not warrant the purchasing of fancy labeling.

We got a voicemail from the gentleman who donates his propagation grapes for our wine-making projects. He called earlier this evening to say that he loved all three wines (blackberry, Sweet Carlos & Tara, and Hell Hath No Fury). We’d told him, when we dropped them off, that the blackberry was the least of our favorites, and that we will probably just enjoy the berries fresh off the vine or syrup’d and over vanilla ice cream, as opposed to drinking them. Now, y’all know I love my wines, but I do so love my berries as well, and when I’d rather eat them than make wine out of them? That MUST speak volumes.

So with all of that out there, be thinking of a great name for this blush, because I would LOVE to send a reader of this blog a bottle of the first official “Grapes of Wrath” blush.

Also? Y’all that have been with me since the beginning KNOW how I have struggled with not smoking. Well, after two weeks on Chantix (and some ridiculously bizarre and terribly realistic, yet not scary, dreams) I have not had a cigarette in a week. Or OFFICIALLY a week tonight at 11 p.m., which is four hours from now.

Between holding myself responsible via Facebook and Instagram, and the different apps and programs I’ve joined for support, I can happily say that I was able to drive to Taco Bell with two of my smoking friends and back without any issue (except that I smelled “smokey” and I didn’t much care for that).

Now, my husband still smokes, and I’m not gonna rag him, because, like me? He will quit when HE is ready. I really don’t think I was mentally ready the last two times I quit. (Once in 2006 (before the birth of this blog) and once after (when I wanted a breast reduction and after I had quit 30+days and found out the insurance wasn’t going to cover? I picked it back up…).

This time, I did it for me. Not with any boobs in my future or pressure from work. Just the thought of living longer and healthier for my grandkids was enough for me. So keep me in your thoughts, because some days can still be a little difficult, but others are a piece of chocolate cake with chocolate icing. 🙂

Mom of three (grown) sons and one (grown) step-daughter, wife of one, friend of many, and owned by seven 4-legged critters, writer, photographer, friend, huge fan of life, and most of all, lover of all things beautiful .….Getting healthy, and hoping to make a dent in the world in a most positive way! (And then there's my alter-ego, the Workaholic, who is me, just unfiltered.)
View all posts by Julie the Workaholic →
This entry was posted in Life’s Little Victories, Uncategorized, Wine and tagged contest, love wine, need a name for my wine!, non-smoker, quit smoking, quitter, wine making, wine naming. Bookmark the permalink.