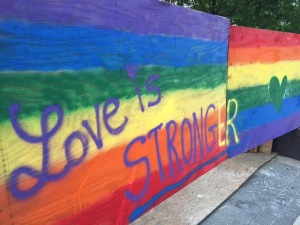 I just cant’t EVEN…

It’s taken me a couple of days to get my thoughts straight on the terrorist attack at Pulse early Sunday morning. Actually, I’m not sure they are straight, but, then, how does one really get their mind wrapped around a senseless mass killing of any kind?

The fact that this asshole targeted the LGBT community upsets me, but worse than that? The comments and judgemental bullshit that I’ve been seeing on news sites and in social media REALLY upset me!

I was raised Catholic, and then I kind of transitioned into a non-denominational Christian church in my teen years and then kind of found my own spiritual path in my 30’s. I used to be fairly fluent in the Bible, and my take-away from my active years in the church is this: sin is sin in God’s eyes. PERIOD.

Lie about something? Sinner! Cheat on your spouse? Sinner! Didn’t go back to the store when you realized the cashier didn’t ring something up? Sinner! Ever say, “No, your ass doesn’t look big in those jeans?” Sinner. Sleep with someone you weren’t married to? SINNER! Just saying..

That said? These Bible thumping so and so’s are spouting off scripture about the heathen lifestyle of Sunday’s victims; that God, himself, cleansed the world of 49 sinners by way of some radical Islamic domestic terrorist? Are you for real? Seriously? You’re killing me, Smalls! 😡

Had this been an assault on a specific ethnic group, or religious sect? I’m pretty sure all the same people that are blasting the LGBT community would be scrambling to be first in line for the sympathy train.

Want to see something moving and sensible from a religious leader (and a Catholic one at that?) go to Father Jim Martin’s Facebook page and watch his video about Sunday’s attack. It might open your eyes, although I like to think that my readers are more like me than like the folks that are judging.

For my Christian readers? Sin is sin in God’s eyes, and also? Judge not lest ye be judged (Matthew 7:1). Just saying.

A little something to think about…

My heart, thoughts and prayers go out to the victims, their families, the survivors and their families after Sunday’s massacre. Peace be with them all! 💔

Mom of three (grown) sons and one (grown) step-daughter, wife of one, friend of many, and owned by seven 4-legged critters, writer, photographer, friend, huge fan of life, and most of all, lover of all things beautiful .….Getting healthy, and hoping to make a dent in the world in a most positive way! (And then there's my alter-ego, the Workaholic, who is me, just unfiltered.)
View all posts by Julie the Workaholic →
This entry was posted in Uncategorized. Bookmark the permalink.