Posted on October 16, 2016 by Julie the Workaholic

Are you kidding me?

It appears that the GOP headquarters in Orange County, North Carolina (specifically Hillsborough) was the target of vandals.

Hillsborough police are investigating after the Republican Party headquarters was vandalized with graffiti and damaged with a flammable material thrown through the front window.

It happened at 347 Ja-Max Drive and was discovered Sunday morning by another business owner.

Authorities said the flammable substance ignited inside the building, burning furniture and damaging the interior of the building. It was contained in a bottle thrown through the window. The window had lettering on it that said, “Freedom Speaks.”

Dallas Woodhouse, executive director of the North Carolina Republican Party, called the attack “political terrorism,” and said the party will not succumb to it.

Woodhouse said the bottle ended up under a couch where people often sit, nap, or relax. He said it was fortunate no one was in the building because it’s often occupied late into the evening during the busy election season.

Are you kidding me?

Okay…here is where I get pissed off.

You have the spare time enough to make Molotov cocktails, graffiti a building and what? Vandalize a flag? OUR flag?

Okay, let me be clear. I live in Goldsboro, Wayne County, North Carolina. A hurricane blew threw here 8 days ago. There was record breaking flooding, which I am sure many of you saw on the network news. People lost their homes. A friend of mine posted a picture of his home’s brand new sign: 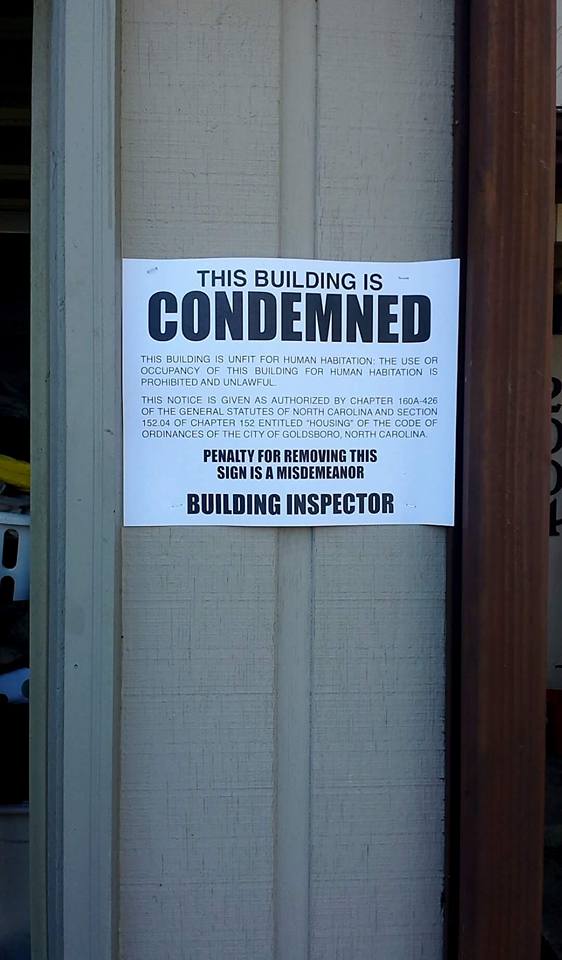 That is  his HOME, y’all! Think about it for a minute. HIS. HOME!

I have another friend who was fortunate enough to have the time before the river invaded her home to get most of her belongings out. Anything they couldn’t move was placed on tables and counters, and thankfully it was high enough. But the water still came in. I can’t even fathom the work they have ahead of them to get the repairs done; the drywall and flooring replaced, all the duct work, everything.

So when I see someone with SOOOOO damned much spare time and excess energy that they want to go out and firebomb a GOP office in my state? Yes, it pisses me right the hell off.

Since you OBVIOUSLY have that much time and energy at your disposal, how about coming on down to places like Kinston, Goldsboro, Fayetteville, Lumberton, Smithfield, Seven Springs, Mar Mac, Mount Olive and putting that time and energy to good use. I mean it.

Stop fucking things up (i.e. being the part of the problem) and come down here and lend a family or local business a helping hand (i.e. being part of the solution). I DARE you! And I say that, because your mentality is that of young teenagers that do stupid shit on a dare. So, yeah. I DARE you to come down east and use that energy for good instead of destroying other people’s stuff.

To the rest of the adults out there, I’m cleaning my closet out for Fall Cleaning and donating what goes to flood people. I CHALLENGE (see what I did there?) to do the same, local readers. Non local readers? Please feel free and donate to your local charity. Your donation will help someone, somewhere. Plus we will all feel better; we cleaned, we donated, and we helped someone in need.

To whomever did this in Hillsborough today? YOU SUCK!

Mom of three (grown) sons and one (grown) step-daughter, wife of one, friend of many, and owned by seven 4-legged critters, writer, photographer, friend, huge fan of life, and most of all, lover of all things beautiful .….Getting healthy, and hoping to make a dent in the world in a most positive way! (And then there's my alter-ego, the Workaholic, who is me, just unfiltered.)
View all posts by Julie the Workaholic →
This entry was posted in lawlessness, Local disasters, Of Interest, Random Acts of Stupid, Seriously? WTF, Uncategorized, violence and tagged Flood relief, Hurricane relief, Orange County GOP, People just suck, Vandalism, VOLUNTEER. Bookmark the permalink.