Posted on November 6, 2017 by Julie the Workaholic 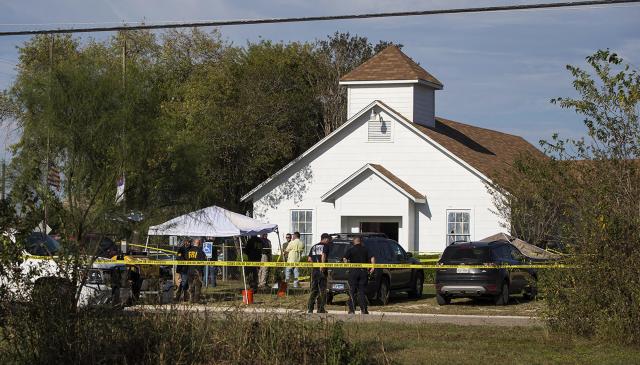 You should NEVER see crime scene tape in front of a church; I’m sorry. 😦

You knew it was coming, right? This post, I mean.

Everyone is all grades of up in arms about, well…arms. You guys, guns have been around for a few centuries, right? Yet here we are with another mass shooting on the books, the second in under five weeks (the first being the Vegas mass shooting). Prior to that? Dylan Roof in South Carolina, James Holmes in the Colorado movie theater, Adam Lanza at Sandy Hook Elementary School. The list goes on and on, and that list is sickening.

Now, while I have some issues with much of what our President says and/or Tweets, I think he was spot-on when he stated earlier that this most recent shooting isn’t a “gun problem,” but a “mental health problem.”

Let’s take a look at how society has changed over the past decades.

I was born in the mid-sixties to a 2-parent family, my mother (hi, Mom!) was a SAHM (Stay At Home Mom) for a good while when my sister and I were growing up, and when she did go to work, it was initially part-time, and I seem to remember her being home when we got there more often than not. That’s one facet of the change I’ve witnessed in society.

Now, let’s also look at how kids played back then versus today.

We were outside, skating, riding bikes, making sure we were home when the streetlights came on, unless we were told otherwise. The only electronic-type devices we had were more than likely AM transistor radios, and if we were REALLY lucky, a portable cassette tape recorder to play around with. Today? Game systems, iPods, iPads, iPhones, laptops, wireless internet, Skype, text messaging, etc. All those things that my generation, as kids, never even dreamed possible. Also, we had the Atari 2600 when I was in high school with harmless games like Space Invaders, PacMan, and Breakout (a newer version of Pong, for those of you old enough to remember). Today? There are so many game systems and games that my out-of-touch self can’t name them all. The games, though! Violent as all get-out, many of them!

Combine both of those things today. Who’s home watching the youngsters and monitoring them playing these “kill, kill, kill” games? Right. Nobody. Our economy, over the past few decades, has become such that moms have to go to work whether they want to or not, because a family can’t make it on one income, anymore. I get it. I had to put my toddlers in day care to go to work, shortly after moving to North Carolina. The Air Force paid for our housing, but didn’t always meet all the bills one incurs with small children.

That being said, you’ve basically gotten the recipe for a perfect storm; latch-key kids raising themselves, kids being put on medication, maybe because they really ARE ADHD, or maybe because the parents are too frazzled from working 8+ hours a day to really deal with actually being parents. I get it. I do. I get home from 8 hours basically brain-fragged, and I only have dogs to deal with, as my kids are grown.

Then you have the inability to spank your kids, because when you do? Someone is calling  Social Services because you are abusing your them. My parents spanked us when we needed it without fear of DSS pounding on the door. Back in the day, you could smack your kid for being unruly in the supermarket. Not today.

So there’s part of it. Then there is the total lack of mental healthcare on so many levels.

To go out there and deliberately take a human life (or more than one)? There is something fundamentally wrong in your head, and you need mental help.

But guess what? If you don’t have insurance, and I mean REALLY good insurance, you are pretty much out of luck. A psychiatrist or therapist is considered a specialist, and garners the highest possible co-pay. What happens if you don’t have any insurance? You can go to a free clinic for reproductive health. There are programs out there for healthcare that don’t cost anything. Where are the free mental health clinics?

Devin Kelley, the shooter from yesterday’s massacre, from recent reports, was released from the Air Force on a Bad Conduct Discharge after serving a year in confinement and a rank reduction after being found guilty of breaking his baby step-son’s skull and assaulting his first wife. That conviction should have kept him from being able to purchase the four firearms he was in possession of at the time of the shooting, but it came to light earlier this evening the the Air Force “forgot” to enter him in the NCIC database that would have kept those gun dealers from selling him weapons.

According to several reports, Kelley worked for about 5 and a half weeks at a New Braunfels amusement park as a night time, unarmed security guard after passing a background check, and was, until last Saturday, working security for an RV company, where he left early on Saturday, complaining of a headache. He didn’t show up for work on Sunday. There is a pretty in-depth read here about how sick Kelley actually was.

He was also living with his second wife and a child at his parents’ home in New Braunfels, according to news reports. That tells me that he probably didn’t have a good health insurance plan, so obviously this guy not only slipped through the cracks, but didn’t have the resources to get the mental help he so obviously needed. The result? Yesterday’s senseless slaughter of innocent people in their church. The one last supposedly “sacred” space that one can go and feel safe.

Look, y’all. There are mentally ill people out there, and they all need some kind of help, whether it just being talk therapy to actual medications and in-patient treatment. Mental illness is a disease, just like cancer, yet there is really nothing in place to help people that can’t afford it.

In a disturbing local case, where an 18 year old decapitated his own mother, the teen had recently been released from a mental health facility by court order. Irrelevant is his residency status; what is relevant is his mental health status. Why did a court order release someone this disturbed? More on this here. Had he been given the help he needed, his mom would still be alive today. Why did he do it? Because he felt like it. He even called 911, himself, meeting law enforcement with a knife in one hand and his mother’s mutilated head in the other.

On a personal note, I know someone who is not working and needs to get into therapy. This individual is unemployed and went to the hospital because he/she had thoughts of harming himself/herself. A social worker spoke to this person, gave him/her a couple of relaxation exercises, some Medicaid forms, and discharged him/her. Has there been any follow-up? Nope. I get it; there aren’t enough resources to go around, nobody to follow-up, nothing…Just send them on their way, hoping that the patient is mentally okay enough to not only fill out the forms and turn them in where they need to go. I would go crazy worrying about these patients if I were in that particular field of healthcare!

I bring the last two cases into the mix to prove a point; guns and knives don’t kill people. People kill people. Guns just let you take them out in bulk, so before you get on the “ban guns” train, think about getting on the “more available mental health care in your area” train.

I swear. I hate turning the news on, anymore.

Thoughts? Insights? Ideas on how we can make this better? I welcome your opinions. I encourage open, adult discussion. Abusive comments will not be approved (if you’ve never commented here before) or deleted.

Mom of three (grown) sons and one (grown) step-daughter, wife of one, friend of many, and owned by seven 4-legged critters, writer, photographer, friend, huge fan of life, and most of all, lover of all things beautiful .….Getting healthy, and hoping to make a dent in the world in a most positive way! (And then there's my alter-ego, the Workaholic, who is me, just unfiltered.)
View all posts by Julie the Workaholic →
This entry was posted in health care, Mental Breakdown, Mental Health, Uncategorized and tagged availability of affordable mental healthcare, free mental health services, low cost mental health services, mass shootings and mental health, Mental Health, mental healthcare in the US, Texas church shooter and mental health. Bookmark the permalink.