August was my last post and I am kind of ashamed of that, but there’s this thing called LIFE and oftentimes it gets in the way of the things that bring us joy.

Less than a month after my last post, Hurricane Florence was kind enough to make a 2-3 day visit to our neck of the woods.

We lost some shingles, had some water damage to our ceilings, and lost almost a good third of our privacy fence (which is a necessity with seven dogs, so being out in the wind and rain tacking up chicken wire to keep them all in was a first priority) and had a LOT of water in both our front and back yards. My bonus-daughter got a case of tonsillitis  during this time, and I took her to an urgent care clinic as soon as it was safe to do so, which was the Sunday after the worst of it. My son and his wife bunked in with us for several days, as well, so that weekend was kind of hectic, to say the least.

A few weeks after the storm (and after Michael, which came hot on Florence’s heels, dumping even more rain) much of the standing water had finally drained from our yard, and we discovered a plethora of issues under our house, which resulted in 2/3 of our sub-floor having to be replaced, as well as many of the floor joists. This wasn’t just because of this particular storm, but a result of a really wet couple of years, and Florence just accelerated the process, which we are thankful for finding. We also had a crap-ton of termites, which wasn’t helping matters at all! These issues ate up a huge chunk of our time between late October and late December. In fact, we had our Thanksgiving dinner of grilled salmon out in the pool house with propane heaters running, because only our bedroom and master bath were habitable during this time.

I can’t take much more

This isn’t good, at all! 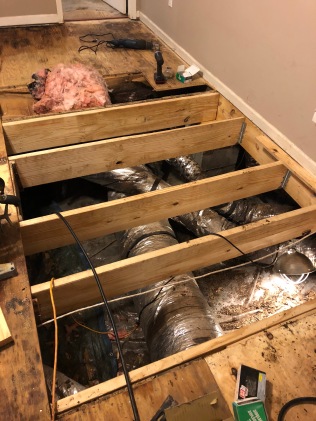 We had more contractors in our home during this time than was humanly acceptable, in my humble opinion. Our laminate floors were pulled in early November, and we were finally ready to have new laminate installed at the end of November, so we were pretty much displaced to our outdoor space during this time.

That was a rough holiday season, to be sure!

Finally, after a bunch of ridiculous SNAFUs through our flooring contractor (who will remain nameless, because it took until LATE MARCH to finally get everything finished, but they DID finish it, so I won’t name them here) we were able to get our home almost habitable by Christmas, but we didn’t know it was going to take several more months to get the rest finished (i.e our dishwasher, contractor-related water leaks, etc.). 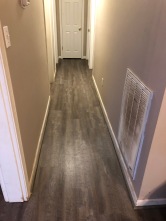 Our homeowner’s insurance didn’t cover but a portion of the issues we experienced during the storm, so my mind immediately went to, “what can I do to bring in some extra money on the side?”

Because I’d been making essential oil and epsom salt based bath salts (when your master bath is one of your safe spaces during the upheaval of your home; baths are a welcomed escape), I started thinking about maybe giving out samples to see if I could generate some interest. There was a gentle rumble.

I also was in the process of un-assing items we no longer needed during an ongoing downsize and found a bunch of soy wax, wicks, containers and fragrance oils, that I’d used previously, so I pulled those out, knowing that new candles would absolutely make our house smell like home again. I poured any and all excess wax into wee heart molds and set them aside for later use.

I went to work, telling people that I was pouring candles again, and the interest was pretty much phenomenal! Everyone wanted to know what they smelled like, so I brought those little heart-shaped extras in and *BOOM*, a business was born.

I also started making melt & pour soaps and bath bombs (those bombs are another story for another time, as I almost went nuts trying to find the best combination of ingredients to make them work), but science works on everyone’s side! (I am really wanting a white lab coat with my name embroidered in lavender for Christmas, this year, LOL!)

I’ve had my hands full, initially trying to come up with really quality products, and now, trying to keep said products on hand!

Today my LLC (Limited Liability Company) became official, and I’ve taken a night off to celebrate!

Tomorrow, though, we are going to be creating our first ever batch of cold process soap, which has intimidated us over the last few months, but we’re going to climb that mountain of uncertainty, don the meth cooking goggles, respirators and gloves and play with lye.

Our cashier was cool, though.

What can I say? I have a warped sense of humor!

So, tomorrow we turn a new page in the life of our newborn business, because it’s going to be raining. We still have a fence to repair and the remainder of the downsizing in the house to do, but in this house? We make hay while the sun shines!

Mom of three (grown) sons and one (grown) step-daughter, wife of one, friend of many, and owned by seven 4-legged critters, writer, photographer, friend, huge fan of life, and most of all, lover of all things beautiful .….Getting healthy, and hoping to make a dent in the world in a most positive way! (And then there's my alter-ego, the Workaholic, who is me, just unfiltered.)
View all posts by Julie the Workaholic →
This entry was posted in Creativity, DIY, Family, Life Changes, Life’s Little Victories, Local disasters, Of Interest, Personal, Random Thoughts and tagged disaster, hand crafted bath bombs, Hand poured candles, hand poured soaps, home repair, Hurricane, life derails you, Moonchild Candle & Body, Small business. Bookmark the permalink.

2 Responses to Are Y’all Still Out There????