Posted on April 3, 2020 by Julie the Workaholic

I know I am like many of my blogging counterparts in that we don’t want to turn our blogs into personal diaries, and like them, I’m finding that these are new and different times. I’m hoping to record much of my experience here and turn it into a book, at some point.

My youngest son is currently a manager at our local Walmart. This is not the first time (and am fairly sure it won’t be the last) that Walmart has pissed me off. (That’s another story for another time.) He stocks, oftentimes fruitlessly, as the store shelves empty faster than he can fill them, right now. He is not masked. They are not controlling social distancing, unless you count the Goldsboro PD guy manning the TP aisle. No lie. He isn’t there, tonight. No more TP to guard, again, at this point.

At any rate, in spite of the state’s “Stay-At-Home” order, this particular store was packed, again, today. WHY is this particular store so danged greedy? WHY are they not pushing social distancing? WHY are there sooooo many people in that store getting into employees’ personal spaces without any regard for their health or wellbeing? I’ve always said that the more I know people, the better I appreciate my dogs!  #staythefuckhome! (That’s a legit hashtag for a legit website, by the way.) Check it out. Seriously.

I sent him the following screen grab from a local news: 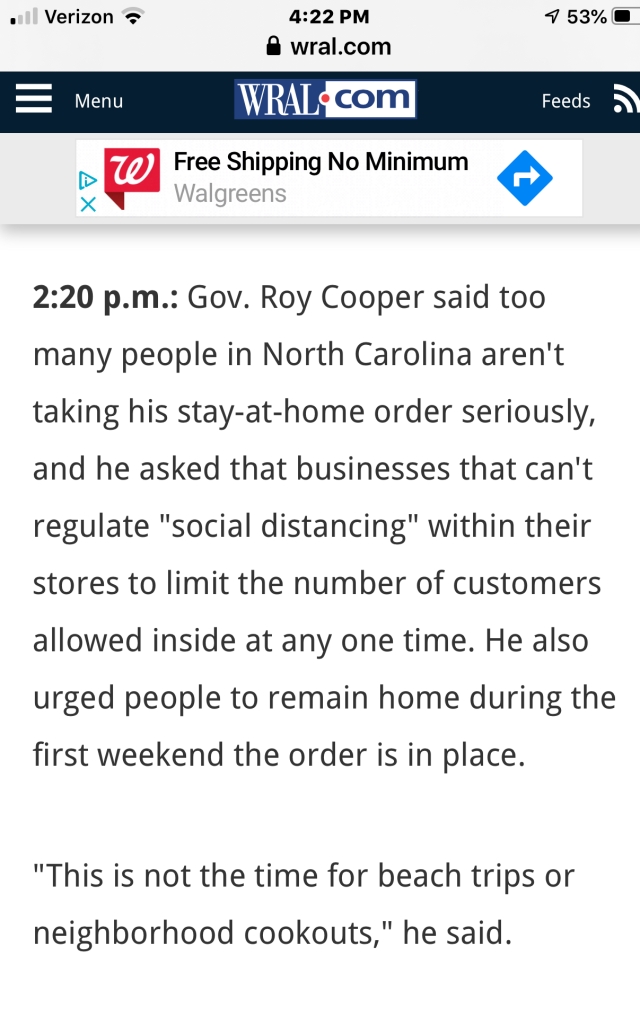 From a WRAL news story. http://www.wral.com

He texted me a few hours later and told me they will be metering customers, starting tomorrow. (About damned time, Walmart!) He also said that tomorrow is going to be crazy, but at least he won’t have the hoards up in his space. He also just shared with me that he is going to check out a semi-truck driving course after this is all over. He’s always loved the big trucks, even as a little! April 1st is April Fool’s day for everyone else, but for us? It’s Big Truck Day. This comes from 2002, when he was 8, and we were out running errands on April Fool’s day and he noticed an extremely large number of semis on the road that day, so we dubbed it “Big Truck Day,” and it stuck all these years later. ❤

In other news, I am feeling a marked improvement in my person, today. Temp is almost normal, sore throat and chills are gone. Headache is almost gone. I did experience something more often today than I did, yesterday, which I’ll share more about if it becomes an issue, at a later date. My Bonus Daughter dropped off a couple of double layer masks last night while I was in the tub. Had to run them through the wash cycle one time before use, but very cool! Two fabric layers and pleated: 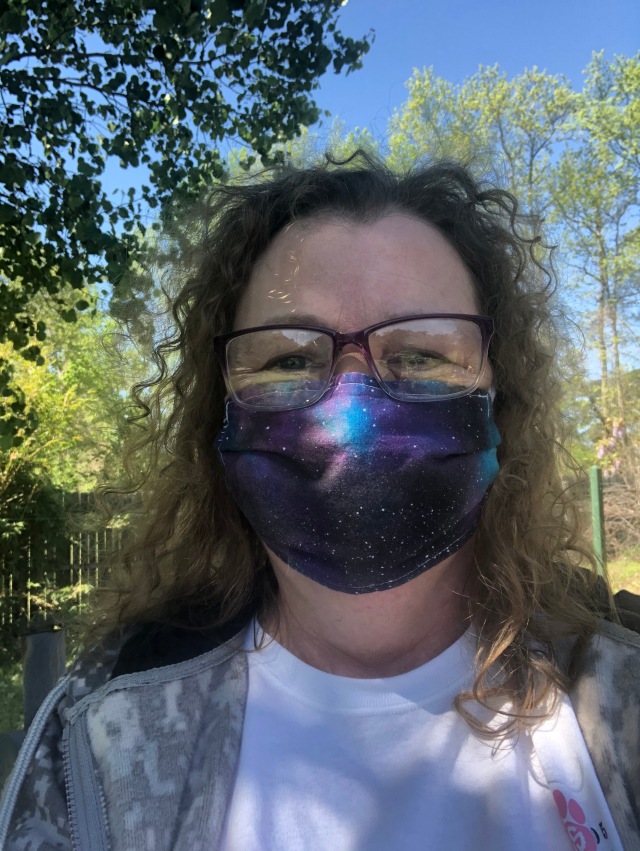 So, excuse my bed head. I’m on PTO, but this mask is killer! ❤ And yes, that is a camo jacket I have on. Don’t judge me!

Today was mellow. I got up, had coffee, phoned into our Safety Huddle, relayed all info to my office. Chatted with my work-wife, who was on her first of two days on/two days off for the second time this week. I did a very low-energy work-out. It wiped me out. Probably too much, too soon. We ate a very early dinner, then I downloaded a new book to my Kindle and half read/half dozed in my hammock this afternoon. I got up and called my friend, Brenda (who is my former boss, four bosses ago, LOL), and had a much overdue conversation with her.

That; THAT! That is one of the blessings of being “Stay-At-Home” and/or quarantined. We are literally FORCED to slow down. This gives us the time that we should have been making, all along, to reconnect with our friends and loved ones. I’ve had more back and forth PM’s from my friend, Sherrill, in Raleigh, whom I haven’t seen in almost a year, because LIFE. When life hands you lemons, make the lemonade because now you have the opportunity to slow the hell down and appreciate how it tastes!

I stumbled upon a live YouTube feed about calming fears during the Coronavirus. I learned a lot. Focusing on the negative creates more negative, but on the flip side? Focusing on the positive, creates more positive. Feeling the negative feels is okay, but vocalizing them and releasing them is crucial. I get that many of you will consider this “woo-woo,” but I simply ask that you give this a go. It’s made a change in my thought process. I’m concerned, but no longer scared to death. Speak of what you are grateful for. Also, take the time out for self-care!

My state, North Carolina, now has 2,230 positive cases reported, up from 2,016 cases reported last night when I posted. If I understand correctly, my county now has 11, up from yesterday’s report, which I think was seven. We also now have 25 deaths, up 6 from the 19 reported last night about this time. I’m tired and really don’t feel like going though the backlog of posts for the week.

Mom of three (grown) sons and one (grown) step-daughter, wife of one, friend of many, and owned by seven 4-legged critters, writer, photographer, friend, huge fan of life, and most of all, lover of all things beautiful .….Getting healthy, and hoping to make a dent in the world in a most positive way! (And then there's my alter-ego, the Workaholic, who is me, just unfiltered.)
View all posts by Julie the Workaholic →
This entry was posted in COVID-19, Health, Mental Health, Personal, Uncategorized and tagged coronavirus, COVID-19, quarantine stay-at-home, stay home. Bookmark the permalink.