Posted on February 7, 2014 by Julie the Workaholic 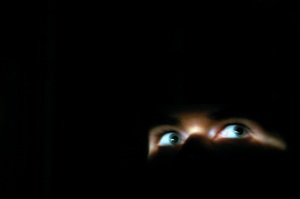 When we last visited, I think we were dealing with the stress and worry during the time between talking to the surgeon and a biopsy that I found out I was going to have.

On the morning of the procedure I went to the office to get about an hour’s work done before I meandered to the other end of the building to go through the admitting process. My husband was with me, and it was pretty apparent that Mr. Don’t-Worry-Until-I’m-Worried (which is his usual stance pertaining to any stressful situation) was starting to show a few cracks on the exterior of his unflappable facade. It’s bad when the girls I work with notice it.

So we got through the admitting process, checked in at the Radiology desk where the nicest people in the world work (have I mentioned how much I love the people in our Radiology department?), and found ourselves in the exam room with two more people that I can add to the “People I Pass in The Hall Regularly That Have Seen My Tits” list.  Damned if one of them isn’t one of the gentlemen who attended the same church as my kids when they were involved in the youth groups there some years back. Great guy. Really…Just not someone I had ever imagined would ever get to ultrasound one of my boobs.

Okay…long story shorter…there was some confusion as to whether the procedure was actually necessary, so the radiologist needed to confer with Dr. Stockton, and by now, I was a basket case because
a) I’d been worrying myself stupid for the past week;
b) I halted all use of my vitamins, minerals, fish oil, ibuprofen, supplements, etc. for the week prior and REALLY could have used some ibuprofen the evening that I slipped on the wet floor and busted my ass getting out of the tub during that time frame, and If I avoided it for nothing, boy was I going to be mad; and
c) ZOMG, people! Don’t you understand I might have cancer and I have this family history, and I have been practically petrified with fear because of how my stupid mind works and you are HONESTLY thinking about NOT doing this so I can leave just as stressed as I came in, probably more so, because instead of getting results in a week I won’t get results at all and we’ll just follow up with another ultrasound in six months and I can worry about the potential time bomb in my boob, and would you do this if I were your wife/sister/girlfriend/mother?????

Yes, that is pretty close to what it sounded like to be in my head at that particular point in time. They said if I wanted to do it we could still go ahead and do it. (And by now, you can probably safely assume the rest of the internal dialogue going on in my head plus swear words…)

Now, some of you know I have a love of tattoos and I have absolutely no problem getting them. Which is kind of contradictory of how I feel about needles in general, since I was plenty wigged out about a long needle going into my boob. They told me they were going to numb the area, and to prepare for a “little stick” and some “burning,” which I never experienced. I mean, I kept waiting for it, and nothing happened, so I finally had to ask them when they were going to do it, and apparently they already had. Win-win!

So the “real” needle went in, and I was watching the ultrasound screen upside down because I needed something to look at to keep my mind off of the fact that I had a huge needle sticking out of me, as they wouldn’t let Johnny stay with me. While they were talking about it, we were all looking at this odd jelly-bean shaped mass on the screen, the needle on the screen (and yes, I do know it was the same needle that I was wearing-it was just easier to view it as a separate entity), and and then the jelly bean simply…deflated…for lack of a better word. Seriously! It just shrunk and went away.

…and how I felt later that day…

That was what the radiologist was looking for. They got what they needed for pathology and told me that I could actually stop worrying at that point, because he was confident enough to say, even without the benefit of a pathology report, that this was a benign cyst. That was a great big mental, “WHEW” for me. Actually, it might have been out loud.

I went home in a sports bra, anxious to get that bag of frozen baby lima beans I’d purchased for this occasion stuffed right on in there, because whatever they numbed me with was starting to beat a hasty retreat. I thought about posting an update blog with what was happy news, but thought better of it. I mean, I still had to go to the follow up appointment with Doc Stockton the following Tuesday to get the “official” results, and I am just superstitious enough to think that if I posted beforehand, something would go wrong and I’d end up retracting any happy statement I made. I decided to wait.

The following Monday, which was the day before my follow up, I got a call from the surgical office. I was being rescheduled because we were expecting snow (and quite a lot of it) the following day, and the office was closing early. Could I come the following Tuesday? Sure.  Why not? I wasn’t in a huge hurry, since I was fairly certain things were good to go. As it turns out, the weather didn’t make it’s appearance till almost five o’clock the next day, but when it did? Wow! I haven’t seen snow on the ground like that in quite some time.

So let’s fast forward to the actual appointment.

I got the path results. No malignancies (yay!), and some wonky cells, so we still get to go and revisit the ultrasound department in six months. I’m pretty okay with that. I’d rather keep an eye on things every six months or so. To me? It’s all about the peace of mind, baby! 😉

So that’s it for now. Nothing to tell, which is good. I have never been so happy to have nothing to tell you than I am right now.

In other news, I’ve started a new lifting program. I’m one week in out of twelve. I hope to review this in another week or so. Stay tuned!

Mom of three (grown) sons and one (grown) step-daughter, wife of one, friend of many, and owned by seven 4-legged critters, writer, photographer, friend, huge fan of life, and most of all, lover of all things beautiful .….Getting healthy, and hoping to make a dent in the world in a most positive way! (And then there's my alter-ego, the Workaholic, who is me, just unfiltered.)
View all posts by Julie the Workaholic →
This entry was posted in Life’s Little Victories and tagged Biopsy, breast cancer, relief. Bookmark the permalink.

6 Responses to Better Late Than Never…