I promised y’all a spooky blog for Friday the 13th, and I opted for my Father’s Day post, instead. My ghost stories are back-burnered for when I experience a writer’s dry spell, which inevitably happens during the upcoming dog days of summer.

In the meantime, real life has been ever so much more interesting…

So I took a four day weekend last week, because, you know…mental health and all. Threw a pool party, which is a rarity, as I am a bit of a hermit, plus six barky little dogs. We sucked it up and invited the girls from work and She Who Shall Not Be Named, as she will always be part of our team. 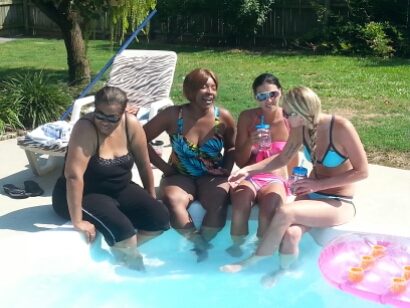 There was tea. There was food. There was maybe a little alcohol. There was a crap-ton of fun and laughs. In other words, it wasn’t the disaster I imagined it would be. Score for me! The girls hung for several hours. We swam, did a little gossip, ate some great grilled race wings (secret recipe including Frank’s Red Hot and spices), awesome spinach dip, salsa, meatballs, salad, salad, salad, and maybe a little alcohol. Nobody got burned, fell in, drowned, or killed, so I call it a success. 😉 we might do it again for my birthday weekend, which is coming up fast.

Monday was like any other Monday after a long weekend, but it didnt suck. Surprise!

Nope. The suck was waiting for me on Tuesday, when I found myself here:

Yeah, that’s me, again, doped up on Valium and laughing gas, lol. Note to self…do the drugged stuff early in the day, because coming off of it late afternoon is a suckfest.

We lost air conditioning in the office on Wednesday. That was what caused me to threaten the HVAC contractor with bodily harm yesterday, which was day #2 of 80+ degree temps in our office. We were a little cranky, to say the least.

I was up front talking to one of the girls and one of our maintwnance guys when a somewhat familiar contractor came in. Our guy told him he might be walking into the lions’ den. I looked at the newcomer and asked him if he was the HVAC guy. Our guy saw what was coming, apparently, and told me this guy was fire suppression. This is when I made as ass out of myself.

I turned to Mr. Fire Suppression and said, “If you see that HVAC guy, you tell him I am looking for him. We’re hot, have been for two days, and have lost the will to live, and I’ve got nothing left to lose.”

Yeah, well, he was, in fact, the guy I was looking for. Way to win friends and influence contractors, right? But, hey…we cooled off real fast after that. I can’t take the credit, though. They had found the problem an hour before, fixed it, then we had a fire alarm (or an eye-candy drill, as I have been known to call them), and that shuts the air handlers off. Within the hour, we were able to hang meat in there. 🙂

I got home to a blown AC, though, so Karma, I guess. It’ll be okay, though. I have one of our guys coming tomorrow to fix it for us. I spend most of my summer afternoons and evenings outside, anyway.

P.S. this is the first post I’ve done fromy phone, so pardon the wonky formatting and weird typos, lol.

Mom of three (grown) sons and one (grown) step-daughter, wife of one, friend of many, and owned by seven 4-legged critters, writer, photographer, friend, huge fan of life, and most of all, lover of all things beautiful .….Getting healthy, and hoping to make a dent in the world in a most positive way! (And then there's my alter-ego, the Workaholic, who is me, just unfiltered.)
View all posts by Julie the Workaholic →
This entry was posted in Friends, Me being a total idiot, Random Acts of Stupid, Random Thoughts, Seriously? WTF, The Day Job and tagged Dentist, good friends, hot weather, long weekends, pool party. Bookmark the permalink.